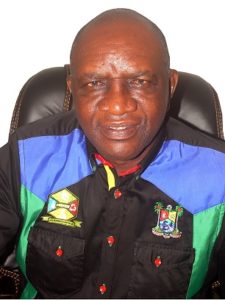 ACP Daniel Koside Isiofia (retd) was born on December 17, 1952 in Adazienu, Anambra State. He hails from Anaocha Local Government Area (LGA) of the state. He started his early education at St Paul’s Catholic School, Ebute-Metta, Lagos State (1961 – 1966). He later attended Government College, Umuahia, Abia State (1967 – 1974) for his secondary education. He enlisted in the Nigeria Police as a Constable in 1974 and retired as an Assistant Commissioner of Police (ACP) in 2009. His work experience includes working at the Staff Office in charge of Rank and File at the Force Headquarters (FHQ) from 1980 till 1983. Also, he was at the Staff Office of the Chief Superintendent of Police Administration/Senior Service, State Headquarters (SHQ), Yola, Adamawa State from 1997 till 2001 and also served as the Divisional Police Officer (DPO) of Aguda, Anthony Village and Ketu Police Stations between 2002 and 2006. He went on to become Area Commander, 7 Police Mobile Force (PMF), Sokoto and later embarked on a peace-keeping mission in Kosovo under the United Nations Mission in Kosovo (UNMIK). While he served, he also attended courses which include the Police Mobile Force (PMF) Training – 1984, Central Planning and Training Course (Police Staff College, Jos) – 1992 and Junior Command Course (Police Staff College, Jos) – 1995. He was appointed as the Corps Marshal, Lagos Environmental Sanitation Corps (LAGESC) in January 2018. His hobbies include football, basketball, movies. He is happily married with children.